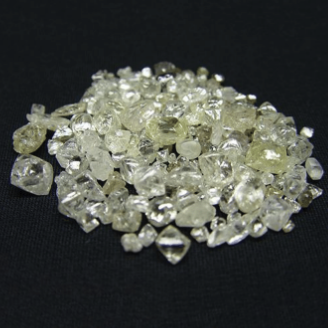 Highly prospective, previously mined deposit situated on the north-western bank of the Vaal River, across the river from the well-known Sydney-on-Vaal mine, the largest privately owned alluvial diamond mine in the world and upstream of Schmidts drift mining operation. Concession size of 1,902 ha. Further upstream is the historic Gong-Gong mine and the De Hoop Mine.

Infrastructure is well developed and experienced labour is available, as is an extensive network of secondary industries geared towards small and large-scale mining. An average grade of 1.39cpht has previously been achieved. Target resource (management estimate) of 12 million tons of diamond if erous gravels.The property has a high possibility of containing concealed kimberlite bodies underneath a surface layer of soil. Two kimberlite fissures and two kimberlite pipes have already been located on the farm. 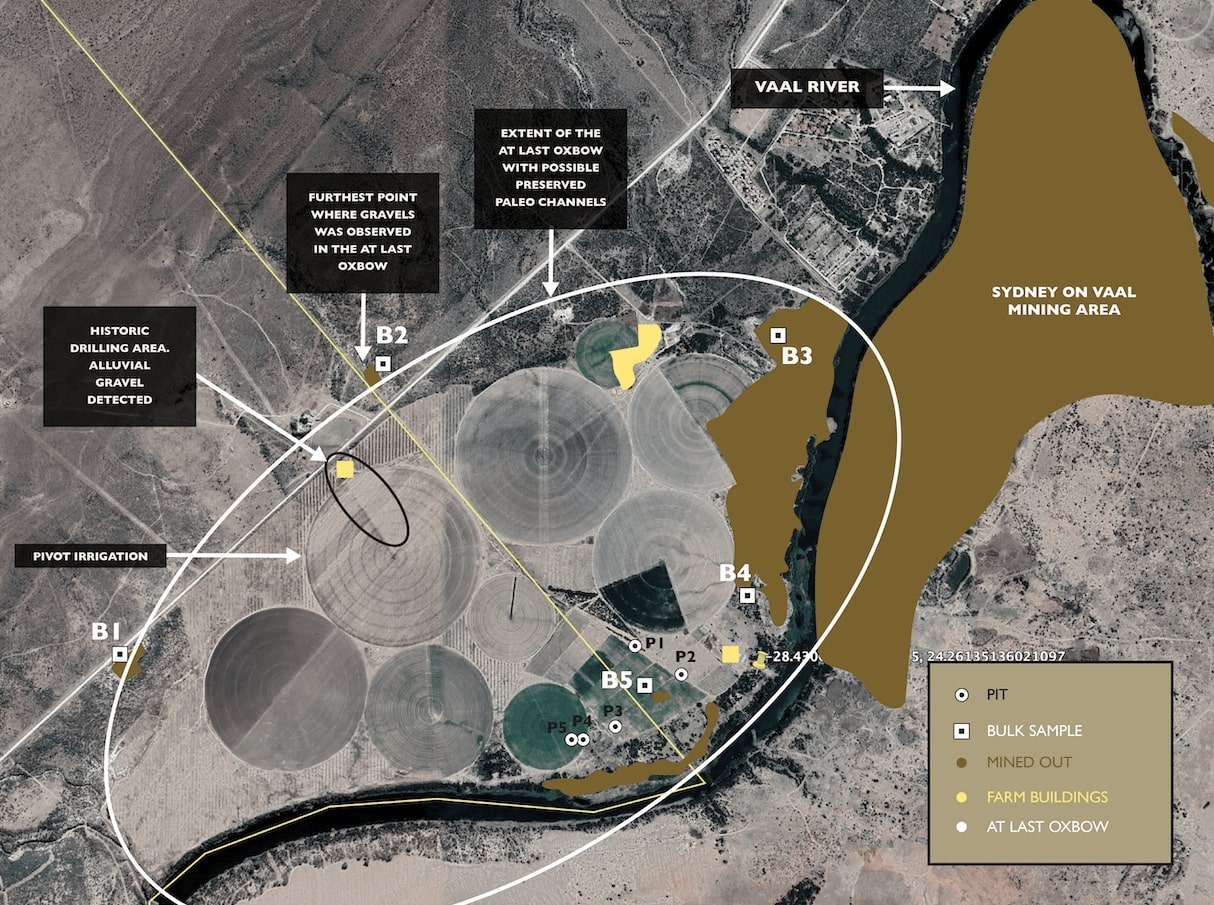 An estimated amount of 2,2 Mt alluvial gravel was mined by previous operators within the At Last Ox-bow, totalling 17,500ct at grades varying between 0.60–1.0 cpht. During August-December 2009, Renaissance excavated a bulk sample on At Last, totalling 11,300 ton yielding 184.62cts (position B5).

The diamonds were sold during the global financial crisis, averaging US$290/ct (instead of normal estimated prices of US$420/ct). The biggest stone recovered was 16.90ct.

Image shows: Historic mining, bulk sample, drilling and pitting positions on At Last. The bulk sample of Renaissance was done at position B5. 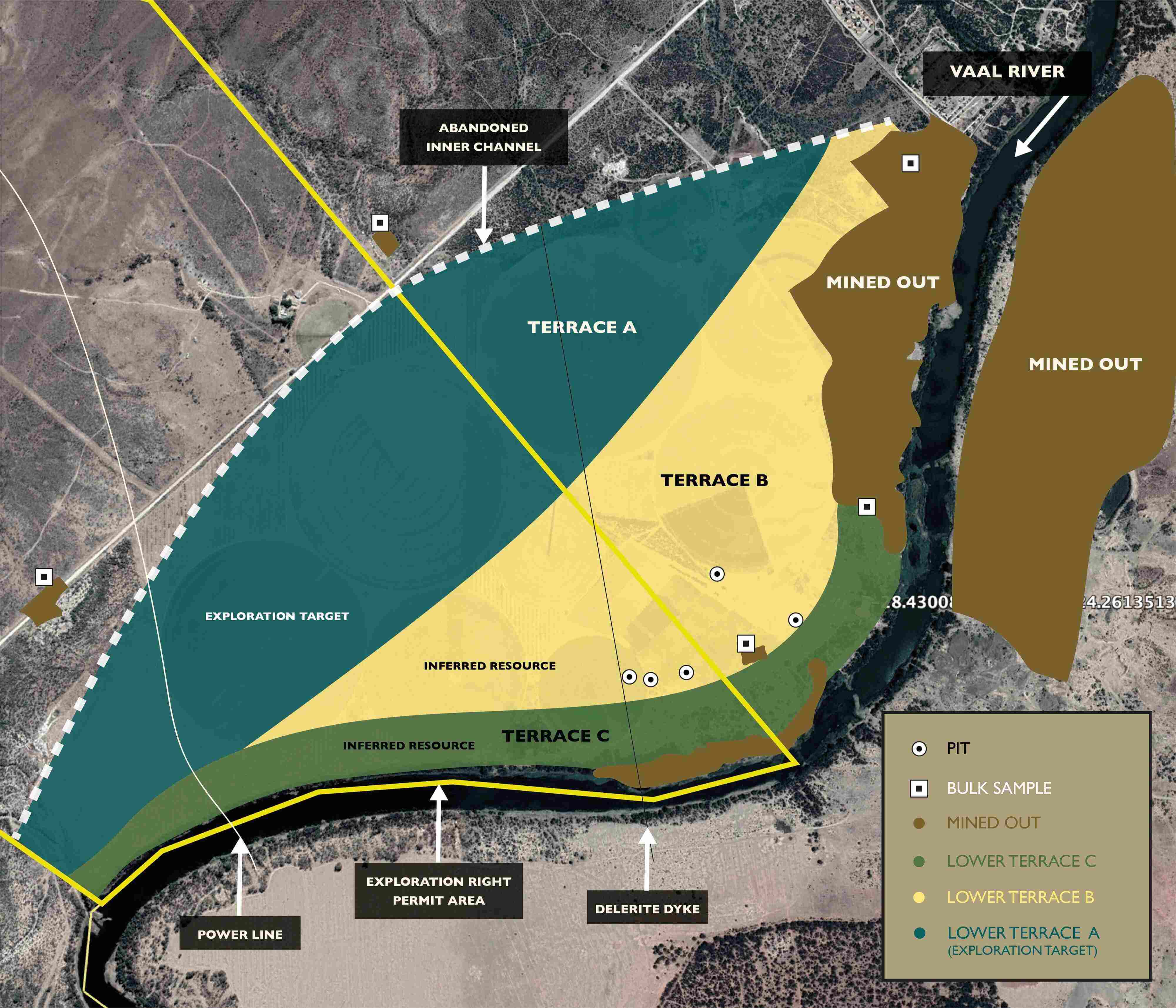 The bedrock in the area consists of +2,700-million-year-old Ventersdorp lavas overlain by younger Dwykatillites and sedimentary rocks comprising of a sequence of siltstone, shale quartzite, dolomite and limestone. A thin surface layer of calcrete covers a large part of the project area.

Alluvial diamond if erous gravel varying from 1–3m thick are found underneath a thick layer of soil, sand and calcrete almost across the entire stretch of the farm.

Locally, bedrock features including large boulders (glacial erratics) protruding from and released by the Dwyka diamictites of the floor rocks, and fractures and potholes found on Ventersdorp bedrock played an important role in diamond concentration of the alluvial deposits.

A dolerite dyke was found on At Last, cutting through the river in the south and running in a north-westerlydirection. As in the case of the Saxendrift dolerite dyke, grades are expected to be high on eitherside of the dyke.

The At Last alluvial gravel deposit can be describe as a cut-off meander or paleo-channels which formed aspart of continuous channel migration during the deposition and reworking of the younger Rietputs C and B gravels, within a relatively wide, alluvium-filled flood plain causing continuous erosion and recycling of alluvium, located between 1–10m above the river. No Rooikoppie gravels are present on the property. 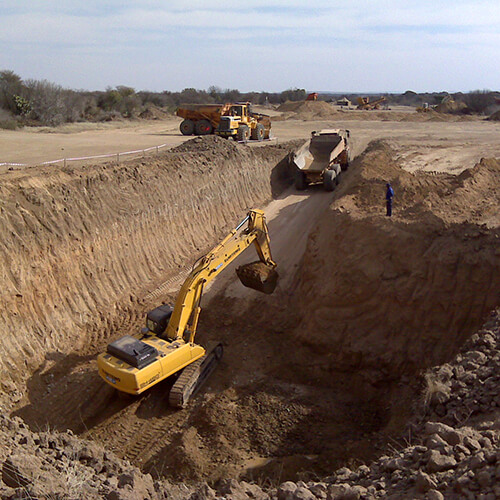 Rietputs C gravels are usually found in or near the present river channel and were mined extensively on the farm and adjacent property-all within the At Last Ox-bow. The greatest recorded height of these younger gravels above the present stream is about 23 metres (at Gong-Gong) and the greatest depth below the river bed drops as low as 18 meters (also at Gong-Gong) a depth that is due to the filling of pot holes in the bed rock.

Progressive channel migration and incision over a few million years during the Pleistocene period produced a downward spiralling and widening meander system that left the preserved alluvial gravel as elevated islands encircled by shallow dipping meander migration surfaces (MMS) and abandoned channels on the outside, normally filled with fluvial sand. Meander maturation occurs when the current river cut severely into the preserved inner gravel to form the current Vaal River as found at At Last.

The younger clast-supported, cobble/boulder Rietputs C gravels on At Last are overlain by calcretized sands(1–3m thick) of the Riverton Formation which are, in turn, succeeded by 1m of red Hutton sands, clayey silt and sand.

Overburden thickness varies between 10–18m across the At Last ox-bow with gravel thicknesses varying between 2–4m thick and gravels are lying directly on shale or tillite as encountered by historic trial miningand bulk sampling exercises. Potholes (most favourable trap site)are normally filled with well-rounded pebbles/cobbles of andesite and finer gravel of resistant material.

Studies in the surrounding area showed that Ilmenites (96%) are by far the most abundant kimberlitic indicator minerals followed by garnets (4%). 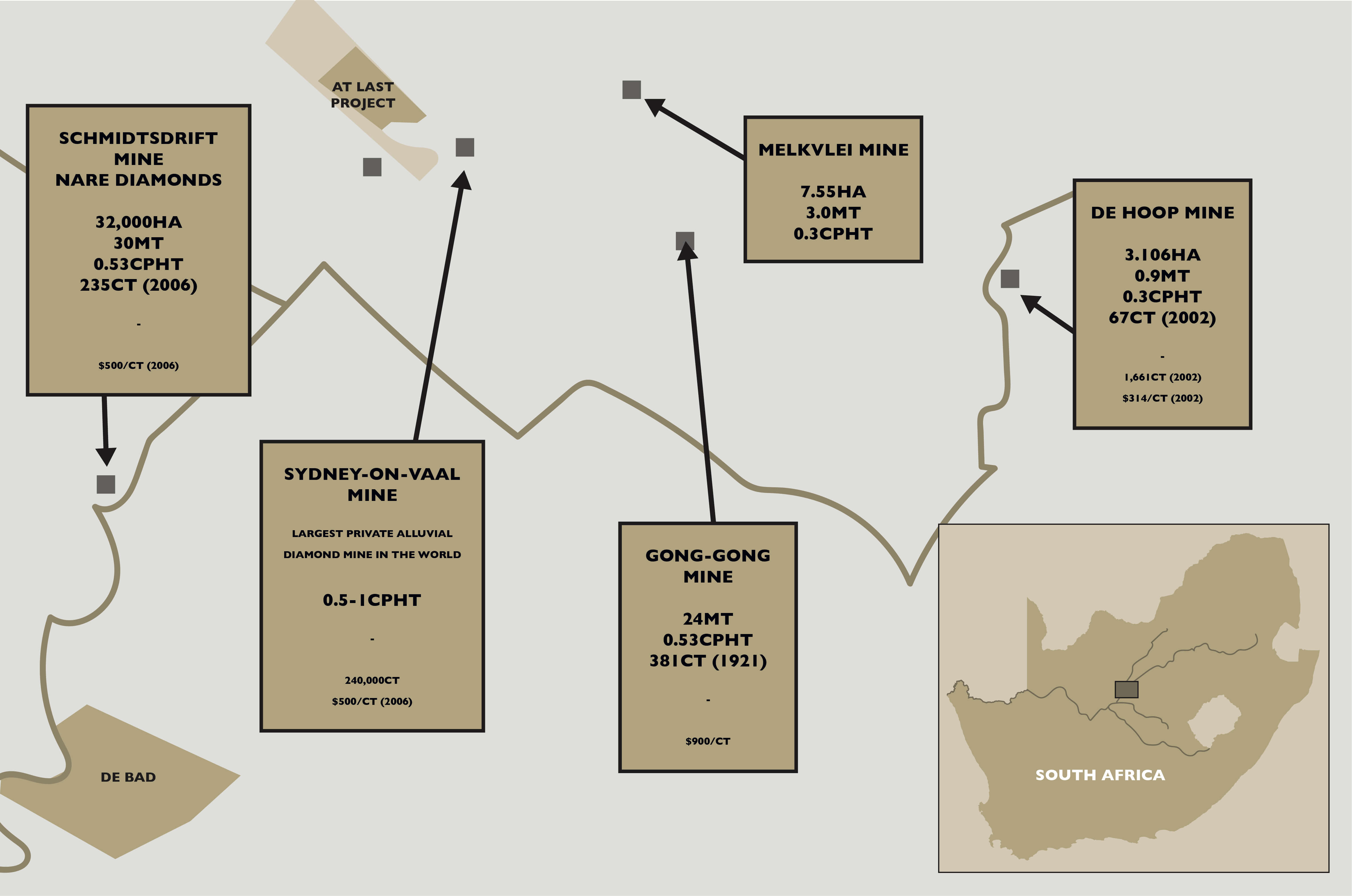 An estimated total of 17,500 carats were historically mined within the At Last Ox-bow.Cooke (2006) reported that 919.8cts were recovered on At Last at an average diamond grade of 1.39 cpht from the treatment of 6,617 tonnes during the period 1994 to 1997.Sonop Mining has been operating a large-scale mining operation across from the At Last project at Sydney on Vaal since 2003. Marshall (1999) stated that grades of between 0.5 and 1.3 cpht could be expected at Sydney-on-Vaal.Average diamond prices achieved in the area are reported by SRK to be US$500/ct (Schmidtsdrift Mine in 2006), US$400/ct(Caerwinning Mine in 2000) and US$500/ct (Sydney-on-Vaal in 2003).

Diamond grades and value estimates are extrapolated beyond the nominal sampling spacing and taking into account the style of the mineralisation, extrapolated from bulk sampling and trial mining areas on the adjacent and existing properties.

Considering the style of the mineralisation and insufficient exploration data available at At Last, a conservative value of US$850/ct is estimated for the resource.