Situated along the northern bank of the Orange River, about 60km west-southwest of the town of Douglas, the project area is 4,346 ha. Infrastructure in the area is very well developed  and experienced labour is available, as is an extensive network of secondary industries geared towards small and large-scale diamond mining.​ Target resource estimate of 34 million tons of diamondiferous gravels.

The first diamond discovered in South Africa was the 21 carat Eureka diamond found in 1866 on the farm De Kalk, located on the river bank between Hopetown and Douglas. ​

The discovery led to a rapid influx of small-scale miners into the area. However, the presence of hard layer of calcrete and a large percentage of banded ironstone made the recovery of diamonds by means of the traditional rotary pan plants difficult. As a result, Middle Orange River has not seen the intense prospecting and mining activities typical of the Vaal and Lower Orange Rivers. Only in late 20th century through the application of modern treatment methods and equipment, particularly magnetic separators, diamond recoveries have improved to the extent that majority of Middle Orange River deposits could be mined economically.​

Currently virtually all the gravel resources of Middle Orange River were covered by means of mineral right application or existing mineral rights. 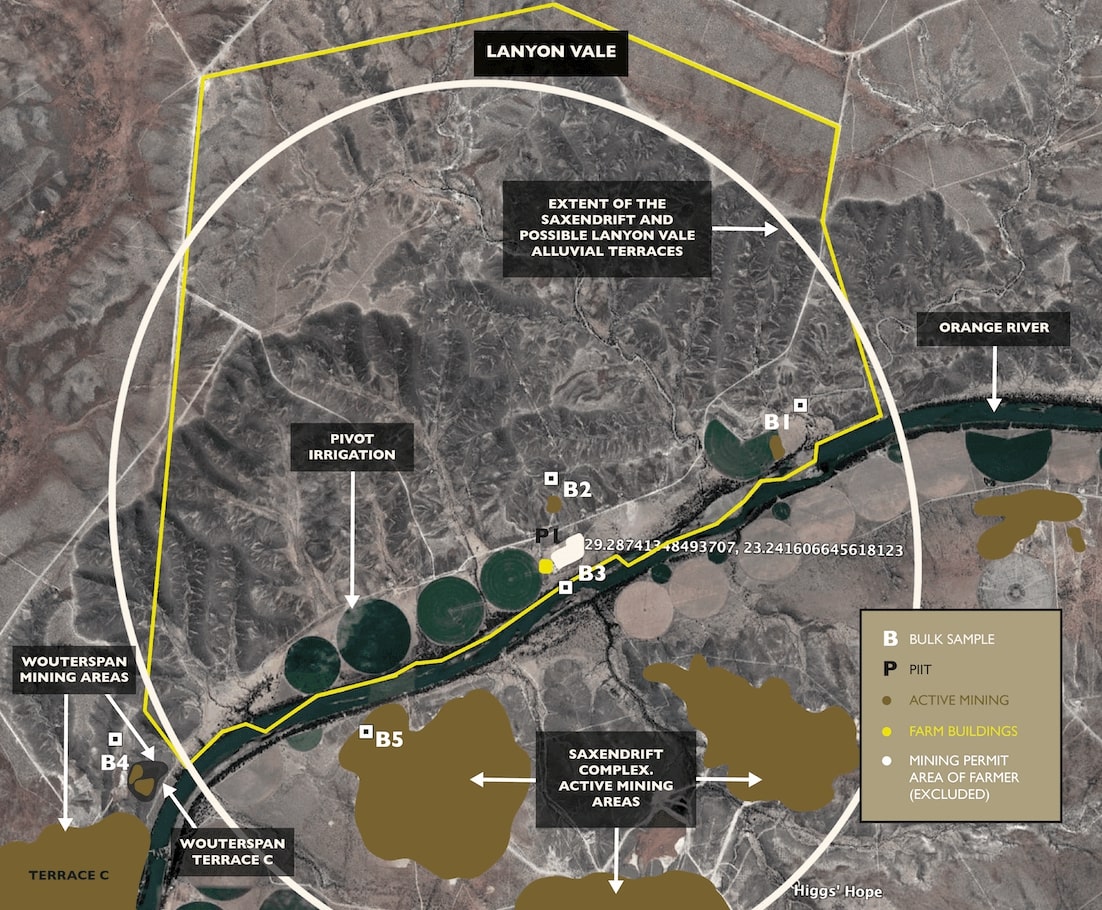 3 bulk samples were made on the project with an estimated amount of 29,970 ton excavated.

Two bulk samples were excavated by Rockwell Diamonds on Terrace B at Wouterspan, located 200m southwest of Lanyon Vale on the same elevation as the projected terraces as found on Lanyon Vale. The results were as follows:

Image shows: Historic mining, bulk sample and pitting positions on Lanyon Vale. An estimated amount of 153 100 ton alluvial gravel was historically bulked sampled by Rockwell Diamonds on Wouterspan, terrace B, 200m outside the western boundary of Lanyon Vale, totalling 820ct at an average grade of 0.53 cpht. 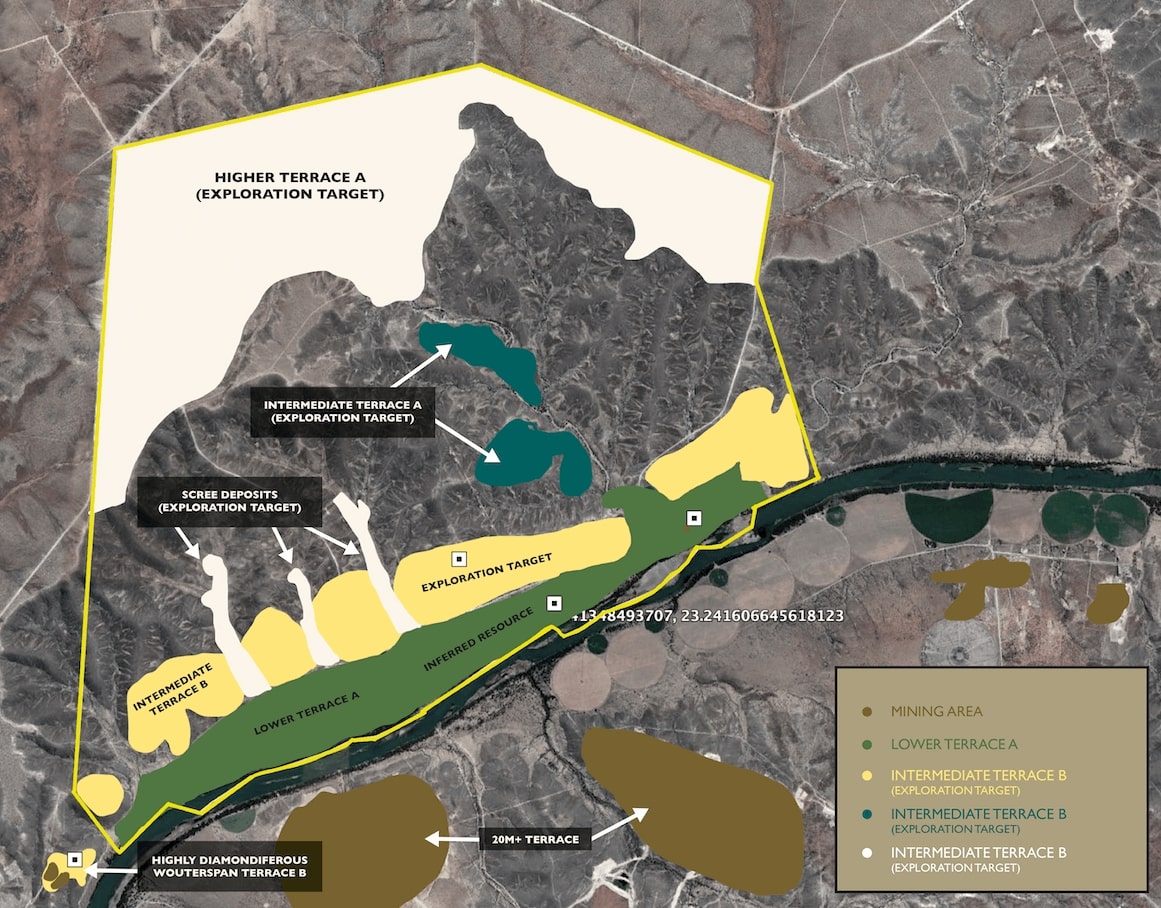 Alluvial diamondiferous gravels are found in the area as remnants of ancient terrace deposits occurring at different elevations above the floor of the present Orange River. Terrace elevations in the Middle Orange River area vary from a few metres to about 110m above the floor of the current river position and the ages of deposition vary from Recent (100,000 years) to Miocene (8Ma). The oldest gravels are found at the highest elevations (Saxendrift higher terrace opposite Lanyon Vale). These deposits were formed in a braided river environment.

These terraces are represented by a set of 'stepped terraces' showing the strongest preservation at the following heights above the present Orange River:

The terraces can display all the typical braided stream features such as channels, point bars and sandbanks. Gravels were deposited on a planar surface comprising tillite and shale of the Dwyka Formation. In general MOR terraces comprise a sedimentary package of:

A thin layer of Rooikoppie gravel usually overlies deposits of fluvial alluvial gravels. The average thickness of these gravels varies from 0.1 to 0.5m. The component clasts consist mainly of poorly rounded pebbles of banded iron formation with some subordinate chert, jasper, quartzite and lava. Decomposition and leaching of the softer clasts and matrix material has resulted in a very substantial concentration of the more durable components in the original gravel, including diamonds.

A very hard layer of calcrete and silcrete, often-exhibiting deep solution cavities, underlies this gravel or depressions which are normally filled with Rooikoppie gravel. The primary fluvial alluvial gravels form deposits of considerable thickness, often in excess of 8m and consists of rapidly aggraded material ranging in size from large boulders to sand. The gravels are compacted and frequently cemented with secondary lime to form calcretised cobble and boulder deposits.

A high terrace with potential Rooikoppie gravels occurs over an area of more than 1000ha on the northern part of the Lanyon Vale project area. 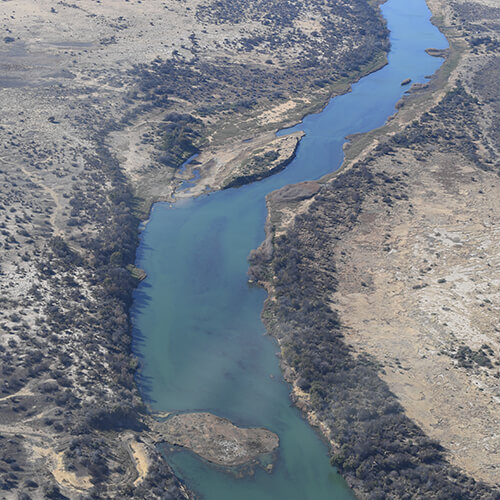 At Lanyon Vale, the erosion and reworking of the intermediate and possible higher terraces resulted in the formation of sheet wash flood gravels in the younger lower terraces situated at 5 – 10 m above the present river.   On average these younger terraces contain lower diamond grades but with an increased value due to the re-working and destruction of the poorer quality stones.  These younger gravels display a more complex internal morphology due to continuous channel migration and erosion of the intermediate and possible higher terraces at Lanyon Vale, all within a relatively wide alluvium-filled flood plain.

The erosion and reworking of the intermediate terraces at Lanyon Vale caused only remnants of potential fluvial alluvial gravel and overlying Rooikoppie gravels to remain on these terraces. 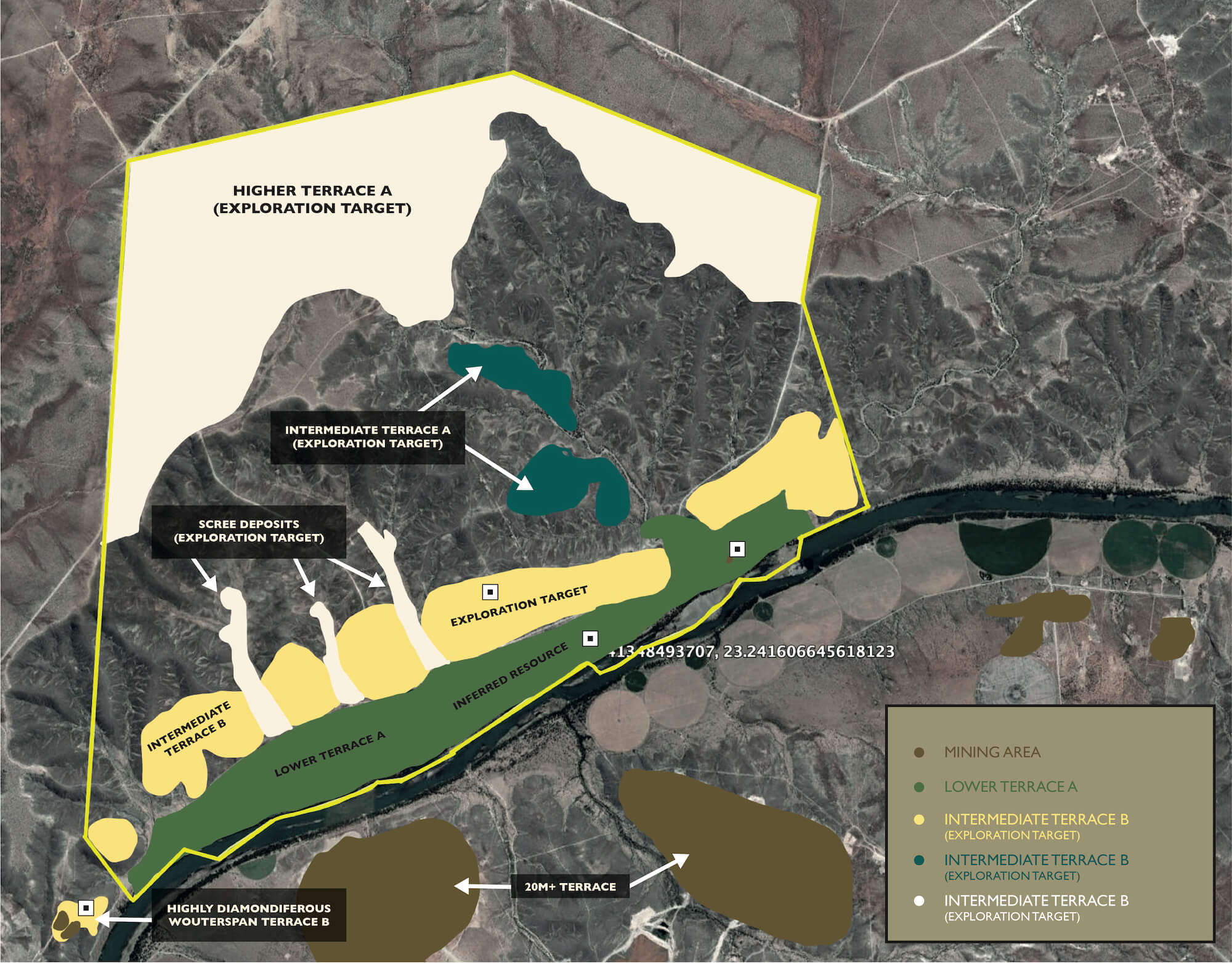 Historic bulk sampling on the Wouterspan B terrace deliver grades between 0.4 – 0.6 cpht with average stone sizes bigger than 2.0 ct/stone.

Highly prospective scree slope deposits are also present at Lanyon Vale. These deposits are the result of physical weathering and erosion of the intermediate terraces at Lanyon Vale, resulting in potentially thick colluvium deposits with an average extent of 1.3 km long and 180 m wide. 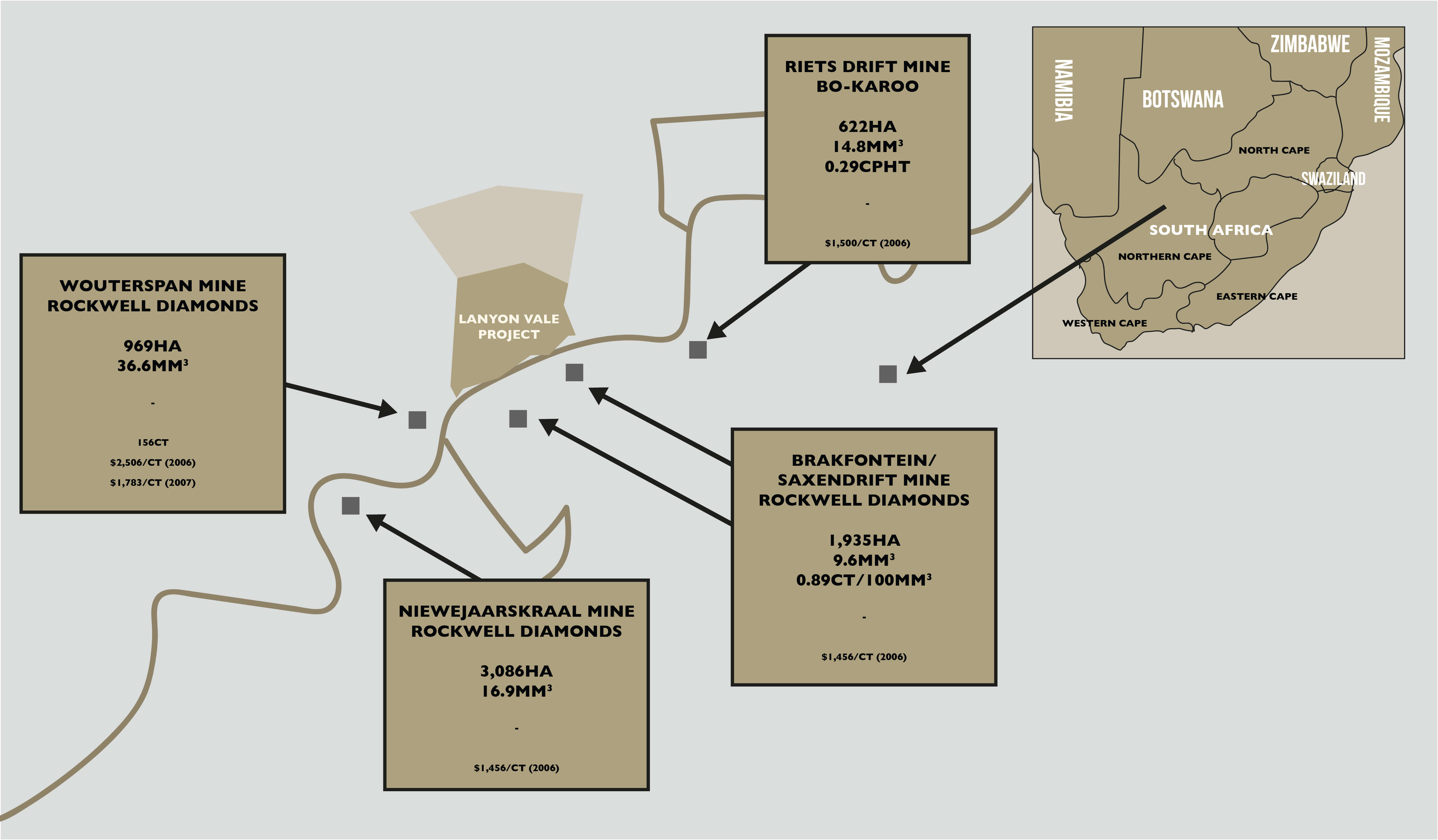 Alluvial diamonds were and are currently being mined extensively in the general area, in particular by operators such as Trans Hex, H.C. van Wyk, Sonop Mining (Chris Potgieter), Nelesco Mining and Rockwell Diamonds.

Other nearby mining operations along the Orange River are located at Betrys, Thornley and Niewejaarskraal.

The Middle Orange River alluvial deposits are well known for the occurrence of large stones and have regularly yielded stones with sizes between 100 and 250 ct/stone including the following:

Recoverable diamond grades are generally low (0.30 to 0.80 cpht), but the stones recovered are of exceptionally high quality. Average selling prices are in the order of US$1 500 to 2000 per carat.

In current market conditions ROM diamond parcels for the Middle Orange River deposits are >US$1,500 per carat (12-month average). The majority (70%) of diamonds recovered from the Wouterspan deposit is +2 carats in size, and 1-2% of stones from this deposit are larger than 100 carats in size.

These figures thus predict a high average diamond value and indicate that the deposit will yield stones of over 100 carats on a regular case as has been shown by recent and historical mining.

During March – October 2008, over 2,000cts were sold from Wouterspan for an average of only US$1,511/ct. During this period, there was a decrease in average diamond value of some 33% from the previous year –reflecting a drop in the average size of the diamonds recovered from the Wouterspan operation, combined with general decreases in international diamond prices towards the end of 2008.

No bulk-sampling or any trial mining was completed for the Lanyon Vale project.

Diamond grades and value estimates for the Lanyon Vale resource are based on the basis of extrapolation beyond the nominal sampling spacing and taking into account the style of the mineralisation, extrapolated from the nearby Wouterspan and Saxendrift complex deposits, respectively 500m adjacent and 1.0km opposite the Lanyon Vale deposit.

Taking into account the style of the mineralisation and insufficient exploration data available at Lanyon Vale, a conservative value of US$2,000/ct is estimated for the resource.