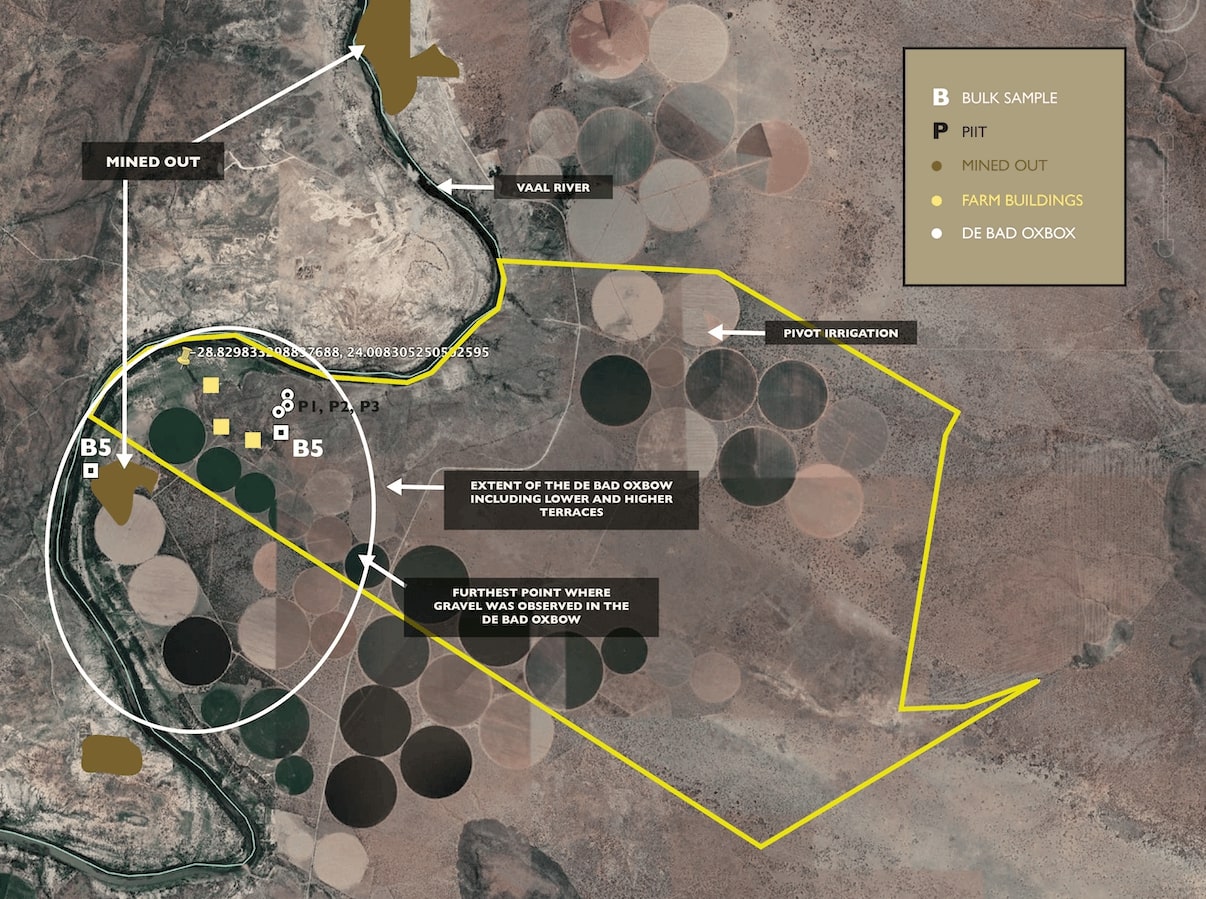 Producing alluvial diamond mine in the past, De Bad has a total area of 3,910 ha. Situated on the bank of the Vaal River, the project area is located in the vicinity of the well-known Schmidtsdrift diamond mine. It is estimated that this deposit contains 3.1 million tons of gravel. The expected in situ grade is 1 cpht.

An average grade of 1.39cpht was reported from the treatment of 6,617 tons during the period 1994 to 1997. The diamonds sold were of high quality – averaging a selling price of US$900 per carat. In addition to its alluvial potential, the property has a high possibility of containing concealed kimberlite bodies underneath a surface layer of soil. Two kimberlite fissures and two kimberlite pipes have already been located on the farm.

Historic mining, bulk sample and pitting positions on De Bad. The trial mining at position B2 was done by Sonop Mining. 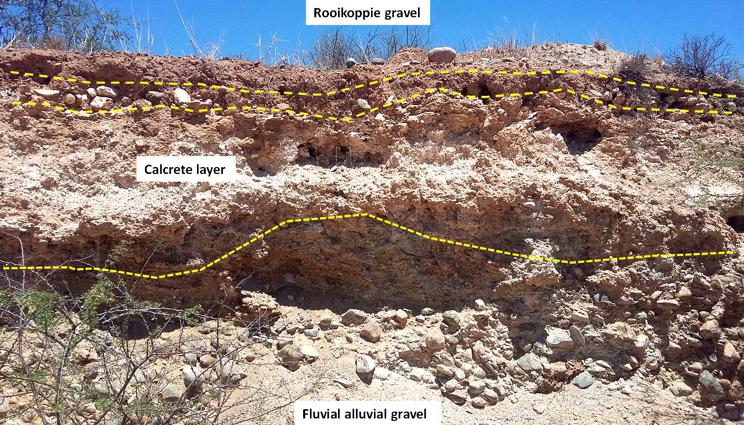 On De Bad, diamondiferous gravels are found within the Rietputs C, B and A terraces and Rooikoppie Gravels.

The Rietputs C fluvial alluvial gravels are found adjacent to the present-day Vaal River (1 – 5m above the river) which has a total length of 3,5km within the De Bad Ox-bow. The extent of the gravels along the river within the De Bad exploration right is 1.9km. The gravels are generally found in the deeper sections of the channel and may be locally very rich.

Areas of enrichment are usually associated with alluvial traps such as bedrock irregularities, rock bars, plunge pools and the presence of large boulders. This gravel has a bimodal nature to it and consists of angular to well-rounded cobbles and boulders of lava together with rounded to well-rounded pebbles and cobbles of quartzite, agate and chert.

Many years ago, adjacent to the river a pit was made in the Rietputs C gravels, where a few cobbles and boulders can still be found, whilst a small portion of the same gravels were mined by Sonop mining on the adjacent property. A bulk sample was also excavated during the same period on the lower terrace.

The Rietputs B fluvial alluvial gravels are found some 800m away from the river, located on elevated terraces, 16 – 18m above the present river. The clast supported, pebble-cobble gravels are 1 – 2 m thick and slightly to massively calcretised, showing weak imbrication. The gravels are overlain by a thin layer of Rooikoppie gravel with an average thickness of 0.5m. The ‘rolling’ bedrock consists of soft Dwyka tillite. Thicker gravel deposits are found in the deeper, low lying areas on the bedrock.

The Rooikoppie Gravels occur as a thin layer covering the Rietputs B fluvial alluvial gravels and extend further away from the terrace to the southeast, up to a height of roughly 21m above the present-day Vaal River. Rooikoppie gravels consist of sub-rounded to well-rounded of the most durable lithologies, such as quartz, quartzite, agate, jasper, chalcedony, fossilized wood and minor BIF. In places Red Hutton sands and soils covers the Rooikoppie gravels.

Rietputs A fluvial alluvial gravels may be present to the southeast of Terrace B up to a height of 21 m above the present river. Well-rounded cobbles mixed with Rooikoppie gravel were found in a small excavation on the northeastern corner of Terrace A.

An estimated total of 6,950 carats were historically mined within the De Bad Ox-bow by previous operators. The De Bad diamondiferous alluvial gravels on the farm were mined between October 2005 and February 2006 at a rate of 16,000 tonnes of gravel per month.

Unverified historic reports stated that during this period a total of 258.17 carats was sold for a total value of R1,587,010. The diamonds sold were of high quality – averaging a selling price of R6,000 (approximately US$900/ct).

Diamond grades and value estimates are extrapolated beyond the nominal sampling spacing and taking into account the style of the mineralisation, extrapolated from bulk sampling and trial mining areas on the adjacent and existing properties.

Considering the style of the mineralisation and insufficient exploration data available at De Bad, a conservative value of US$850/ct is estimated for the resource.